Getting Sick In Mexico

Have you ever gone on vacation and wondered what happens if you get sick?

Have you ever brought your kids on vacation and wondered what if  he/she gets sick?

It all started the week before we came to Ajijic, Mexico. We spent 6 days with the Mercer family in Arkansas. They have a nice pool and with the temperature hitting 94 – 98 degrees each day, the kids basically lived in it.

Well, a couple of days before we were to leave for Texas, India started complaining of her ear hurting when it was time for bed.  After watching her do somersaults in the pool, Camille & I figured that she had “swimmer’s  ear”.  If she propped herself up on pillows she would do ok.

Fast forward to our first night at our house in Ajijic. I mentioned to the landlord that India’s ear was bothering her and she probably needed some antibiotics. She mentioned that there was a clinic down the road which would take good care of us. She and her husband go there and several of their renters have gone there too with good results.

Now call me a medical snob, but when I get sick or my kiddos get sick we go to the Doctor’s office.  We get an appointment, we show up, wait 20-30 minutes and see the doctor. The word “clinic” reminds me of going to the emergency room at 3am, waiting around in a room with people screaming in pain, while nurses stand around complaining to each other about how hard they’re worked.

… Not the most pleasant thoughts.

So our first night here and India (who is typically a brave little indian) has a terrible night. She and we are up most of the night with her. While I know the clinic is open 24 hours a day, we console India and tell her that once it’s light outside we’ll go to the “Doctor’s office” 😉

Sidenote: Practically everyone who has visited Mexico will give you the sage advice to “Not drive at night.”  There are actually several reasons for that.  One reason is that animals will and do lie down on the roads at night looking for warmth.  When in Arkansas I met up with my brother’s brother-in-law Justin Owen and he told me how he was driving at night, flying down the highway  when suddenly there were not one, not two, but four pigs in the middle of the road.  He had to play the grim reaper and choose one little piggy who would never go to market again.  Needless to say, hitting a pig is not good for your car.  Justin did make it back into the States, but had to replace his axel a few days layer.

So I wasn’t wanting to drive in a foreign place, at least on my first night here! 😉

Sunrise here is about 7:30am, so a little while after that India and I head out to the GULP…. CLINIC!

Camille, Austin, & Ginger Kitty stayed back at the house. Why should we all be traumatized?

About 20 minutes later in a pretty heavy rain (in a place where it “never rains in the daytime”) we pull into the clinic.

Here’s  a picture of it. 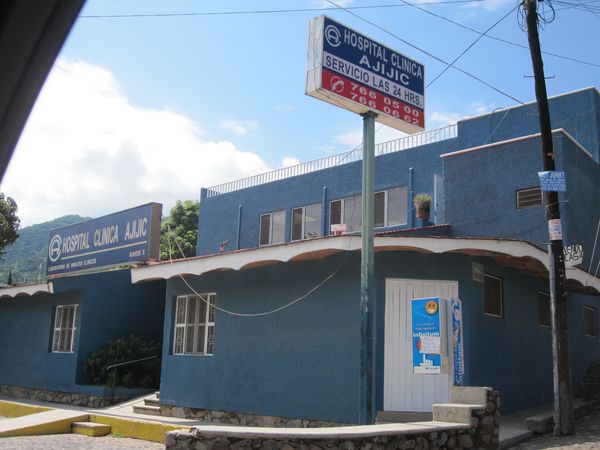 The clinic where I brought India

Hmmm… Not too scary on the OUTSIDE, but I bet it’s REALLY SCARY on the inside.

We walk in and it’s eerily quiet.  In a combination of  broken Spanish and sign language  I explain to the receptionist that my daughter’s ear hurts.

She motions to wait and points to the waiting room which contains 10 chairs. One is occupied by a young teenage boy, the rest are empty.

After waiting 12 minutes a thirty-ish woman doctor comes out, we exchange “Bueno dias'” she walks into an office and we follow.

Her English was very good, she asked a lot of questions, and never seemed rushed. She checked India’s ear, nose, throat, etc…

Long story short… she had a throat infection that was causing irritation in her left ear. The doctor wrote down a prescription for anti-biotics and 2 other medicines.

We had arrived about 8:30am and left about 9am. Hmmm not bad at all.

There is a pharmacy about a block away from the clinic where I got her prescriptions filled for about $23. At the same time we picked up some yummy raspberry and pineapple filled danish that they make right in the pharmacy.

By the afternoon India said her ear wasn’t bothering her anymore. 🙂

But… what about more serious sicknesses?

The next morning we went to our meeting. The WT conductor mentioned at the end that his wife was feeling much better.  After the meeting I went and introduced myself and asked about his wife’s well being.

The Saturday before he brought his wife to the same clinic because she was feeling very weak.

The doctor on call was thankfully a cardiologist. He recognized that she was having a heart attack.

He put them into his personal car and drove them the 35 minute drive to the hospital in Guadalajara (2nd largest city in the country).  She had 2 clogged arteries which they inserted stents, and caught things in time.

He was very happy with the professional and personal attention his wife received. Pretty good investment of 150 pesos ($12).

Not sure of the hospital cost, but I would guess between 10-25% of the cost if this had happened in the USA.

She’s on the mend, and improving daily.

People here tend to be less rushed and want to be helpful. Good medical care and attention is available when needed.