The Truck Is Here!

People have been asking how we’re getting our stuff to our house in Mexico.

While we are packing our van with as much as we can fit, we still have lots more to bring.

We’re doing a self service move.  It works like this:

It’s a bit more complicated than that, but that’s a story for another day 🙂

Before continuing I need to regress and explain why we are a little paranoid about trailer trucks.

12 years ago, we designed and built our house. We hired a company from North Carolina to pre-build our house. Not a modular house that comes in a few pieces and is dropped in position by crane, but instead, it is delivered in a truck with premade wall sections, trusses, interior walls, etc… It’s built in a factory and then shipped to the construction site. This method of building saves a lot in labor charges. Tradesmen in New England make a lot more than most locations in the country. Plus when we were building there was so much work that tradesmen were straight out… so it was hard to stay on schedule.

We’re all excited as this giant 40′ trailer comes down our dead end street in a snowstorm driven by a good ole’ southern boy who doesn’t see much snow and is quite uncomfortable with it. He makes it clear that he can’t get the trailer up the hill.

Yikes! Time for plan “B”

We have to carry the entire house up a torn up frozen muddy hill. Man, I’m glad I was 12 years younger 😉

We used a couple of pickup trucks to help, but man it was a tiring day. Austin was just a baby (3 months old) and spent a lot of time sleeping in a running car with the heat on that day.

By the end of the day we had carried most of the house up the hill, but still had a bunch of trusses tied to a tree in the street. Fortunately there were no traffic accidents caused by our trusses in the road and by the second day we had everything safely in the backyard.

So since we have carried out house UP the hill, we really don’t want to carry it DOWN the hill! 😉

Usually you would expect a call the day before to confirm but that never happened. So this morning I call Roadway to ask when the trailer is being dropped off. I then get the reply that “We can’t drop it off to a residential address because they can’t leave it in the street because we may have a snowstorm next week and that would mess up the plows”.

In other words… “No truck for you!”

“Well just put it in my driveway” I suggest.

“No, we can’t do that. Some clients have complained we damaged their driveway.”

“That’s ok. I can understand that being a problem with hot asphalt in the summer, but things should be fine in the winter”

“Ok.. I’ll get it to you this afternoon”

So for some reason I neglected to mention that I have a rather “interesting” S-shaped driveway that rises 25 feet from street to main level.  No sense in asking for problems 😉

So we put together some video on the adventure of getting this 28″ up our driveway. 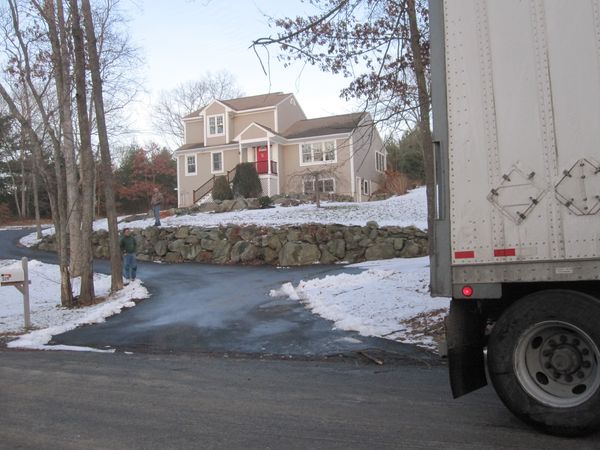 The truck arrives. But will it make it up the hill? 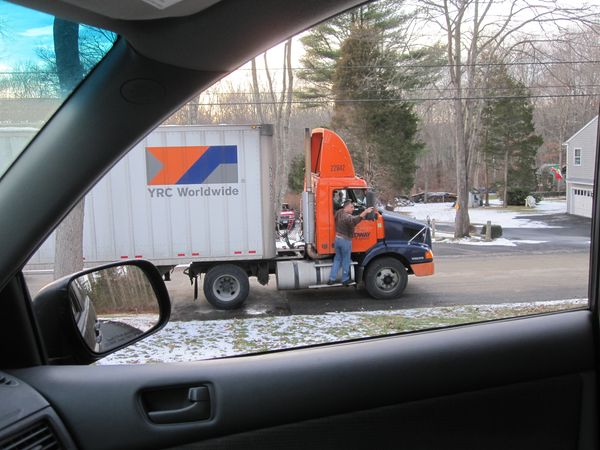 Mike using his diplomacy skills to prevent the truck driver from leaving and convincing him that he can make it up the hill. 🙂 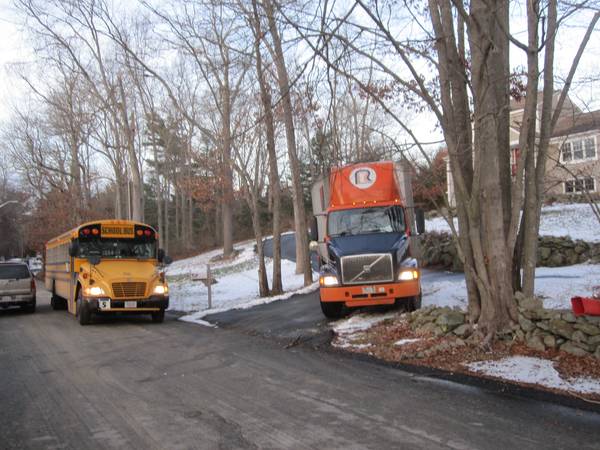 Kudos to Dave the driver! He did a great job getting trailer up to the top of the driveway.

So we’ll be packing this weekend, the trailer should get removed on Tuesday, and we plan on hitting the road either Tuesday or early Wednesday morning.