Last Saturday we traveled to Morelia.

Morelia, the state capital of Michoacan, has a population of about 500 000 and is a UNESCO World Heritage site. The city has over 200 historical buildings, many built of characteristic pink quarrystone. With many lovely plazas, gardens and atriums and a well-earned reputation as a regional cultural center, Morelia is a destination for those who enjoy colonial architecture and local culture.

The city was founded in 1541 by Antonio de Mendoza and its original name was Valladolid. The name was changed after Mexico’s War of Independence, in honor of one of its heroes, Jose Maria Morelos de Pavon, who was born in the city in 1765. Of Morelia’s many beautiful historical monuments, the cathedral and the aqueduct are the most impressive. 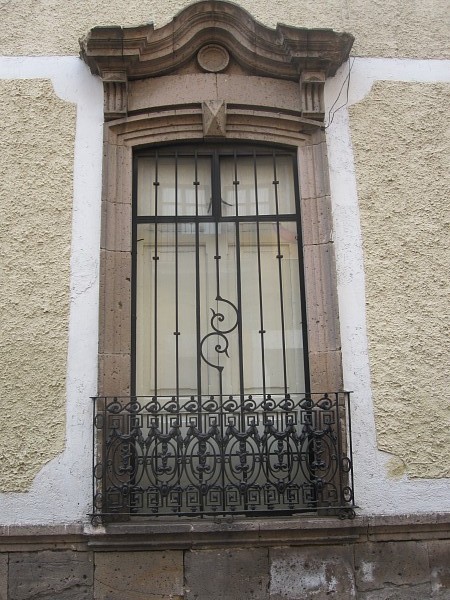 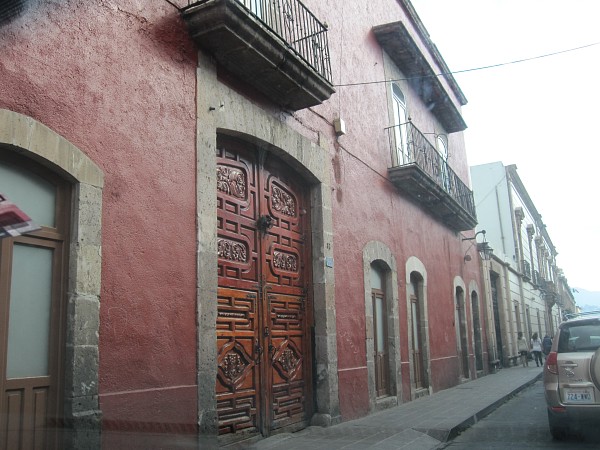 We followed some friends who are very adventurous and have lived in Mexico for several years now.  They just love to find new interesting spots and new ways to get to old ones.  We are looking forward to spending time with David and Sarah.
We drove around the southern part of Lake Chapala and enjoyed this new area we had not yet been to.  There is a teeny tiny fishing village (it is literally a one way driveway size road that loops around about a 1/2 mile -and that is the entire village) here that you won’t find in any tourist maps but is a point of interest.  You see, the fishing boats bring in the fresh fish here to be processed.  Not like you picture a fish processing plant in the US.  This is a building that looks like a barn and is open on the side that faces the water.  The leftovers attract pelicans.  By the hundreds.  Or thousands …according to this link.

Some 2000 White Pelicans line up daily for free meals at the pueblo of Petatán on the eastern end of Lake Chapala.

The White Pelican is a large bird with a wingspan of up to three meters and may weigh up to seven kilograms. It does not dive-bomb fish as do some other pelicans, which may explain why it finds Lake Chapala particularly attractive. 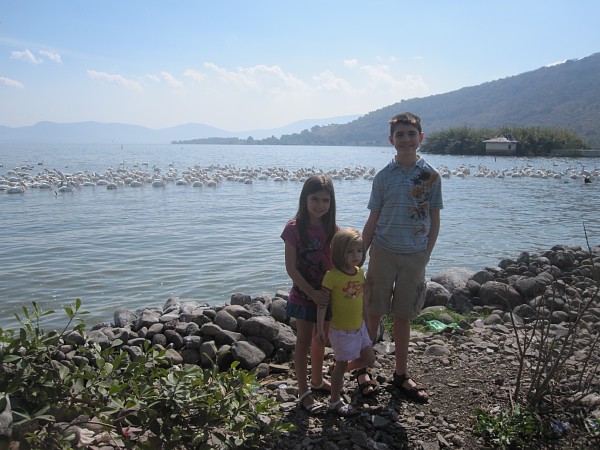 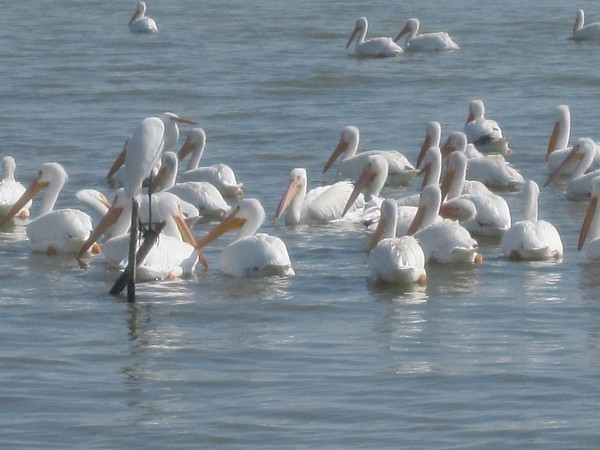 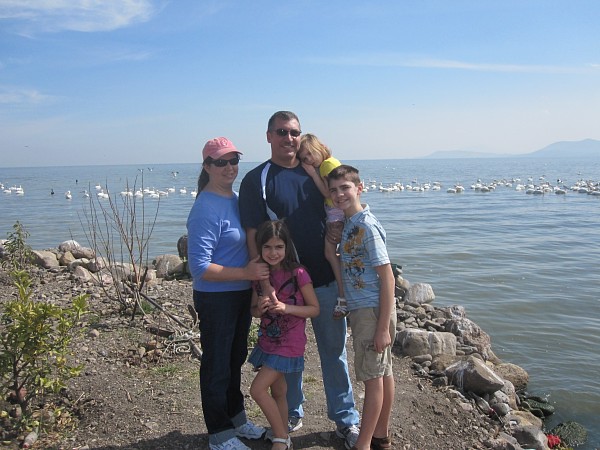 That was very cool.  And it didn’t even smell too fishy.  Austin offered us a commentary on it.
[youtube O2M4BLbgxNw]
A couple hours later we came to our destination.

We attended a special assembly day and our hotel was just across the plaza.  Best part of the whole thing?  The promise of a nice hot shower.  (have you read the previous posts this week?)

As we are checking in (and Camille is wanting to move things along ASAP to get to her destination of the said nice hot shower) our friends realize they left their suitcase with their suit and dress clothes back home -4 hours away.  A little panic but at least they get a good story out of it.  Right?  You have no idea…

OK… so we are checking in.  (sorry, lots happens at the same time and I can’t always keep it straight)  😉  And Mikee looks up as this tall guy with a little kid walk by.  They both stop and point, “Hey I know you.”  It’s Doug Beane -a friend from when we lived in Wallkill, NY.  We haven’t seen him and Becky in 16 years.  16 years!  How are we even old enough to say that?  He has kids.  We have kids.  Lots has changed.  And here we bump into each other at the same hotel in Morelia, Mexico.  Go figure.  So we spend a couple minutes doing the quick catch-up game.  Doug and Becky and their boys are moving to Manzillo -a city by the beach that we visited this summer.  They have been driving down from Pennsylvania.  You can imagine how much in common that conversation had.

You may be wondering if Camille has had her nice hot shower yet?

Well, first we went with our friends to look for some dress clothes and visited a couple stores.  And nothing.  An acceptable shirt and tie was found at Walmart but no skirt or dress for my sweet friend.  🙁  So, we returned to our very nice hotel.  Disappointed not to find something to wear but excited for my nice hot shower.

OK.  Enough about the nice hot shower.  Fast forward to Sunday morning.  Mikee and I and our troops all get dressed up real nice and we are looking forward to the assembly.  Of course, the momma is the last one dressed after making lunch, checking Austin’s tie, fixing the girls hair bows, and such.  Get to fix my hair and put on my makeup and almost ready and…

…Mikee realizes that he has forgotten to bring along his belt for his suit.  **snicker snicker**  We joke that the “forget meeting clothes virus” must be contagious.  And then…

…a knock on the door as Mikee just finished picking 1 of the 2 ties he brought and still has the other in his hand.  A friend forgot their tie and wondered if we might possibly have an extra.  **snicker snicker**  The virus is spreading.  AND THEN…

…as our family of 5 is ready to walk out the door the last thing I do is go to put on my skirt.  But no!  No skirt!  Camille packed ever’thing for ever’body in the family but forgot her skirt.  Ack!  (maybe the guilty culprit is the deprivation of a nice hot shower for way too long)  🙂 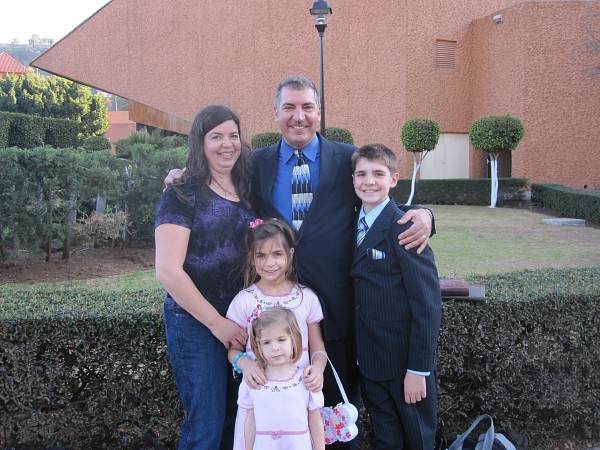 What's wrong with this picture?

The good news is that at least these were pretty good jeans.  And (you can’t see them) some totally fabulous shoes.
“Wow”, you say.  That was a lot of excitement for one day.  Yes it was.  But it was exciting attend the assembly.  A nice program.  Great to meet up with some other families who have also moved here to Mexico to help out in the English field. There were over 900 there and that is just part of one of the English circuits.  People came from 8 hours away to attend.
There was a demo of a family study and the stage was set with couch and couple chairs and table with COKE, CHIPS, BOOKS (props) on it and Kitty says, “Oooo, a drama.”
We thought our excitement was complete but lunchtime brought more adrenaline pumping events.  As we are about to eat lunch India starts to jump up and down and cry out, “I just got stung!  I just go stung!”  Mikee looks and she has a hold from some kind of sting/bite in her forearm.  Austin and I see something scurry/fly across the cooler but it’s a little too dark to make out what it is.  (we are new here to Mexico and all of us are a little gun shy about the new unfamiliar insects)  Mikee brings her to first aid to see if we need to think about getting to a hospital or what’s going on.  Austin and I found a horse fly on the cooler and squished it and saved it in a napkin for “evidence”.  India’s arm swelled and got bright red.  The doctor there marked the area so we could see if the swelling increased or decreased.  They treated her.  She is ok.  The final word is that it was a bite by a horsefly.  And they REALLY hurt. 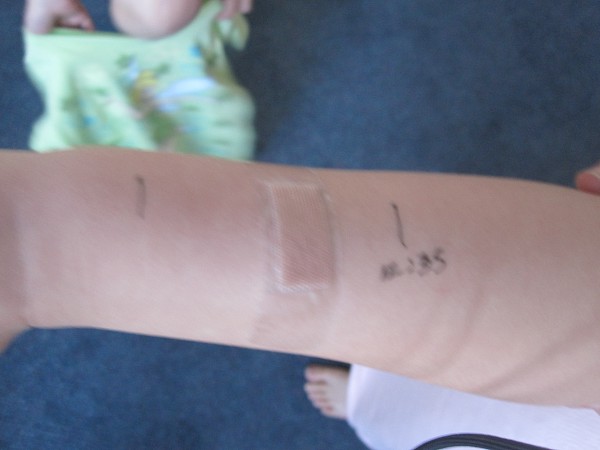 The mark of India's swelling 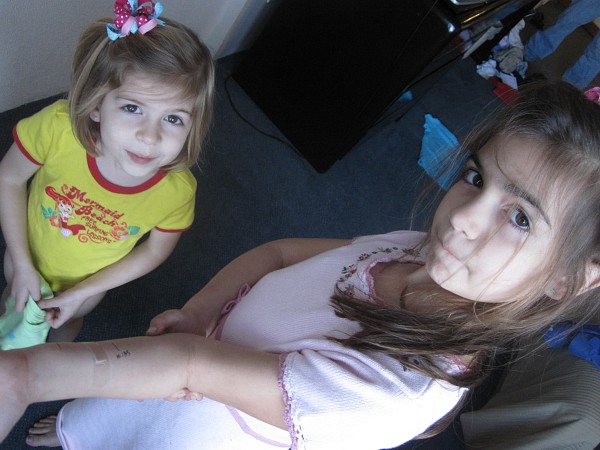 Of course, if it was going to happen it would happen to India.  She was the reason we had to visit doctors down here in the summer in several different towns.  We are very glad she is ok.  That night she put little love notes on our bed.  We just love that thoughtful Little Hula.
That night it was nice to visit with Doug and Becky.  We were sharing stories about driving across 2 large countries with little kids and packed out cars.  The kids all were able to play and unwind and get to know each other too.  We know they will do great in Manzanillo. 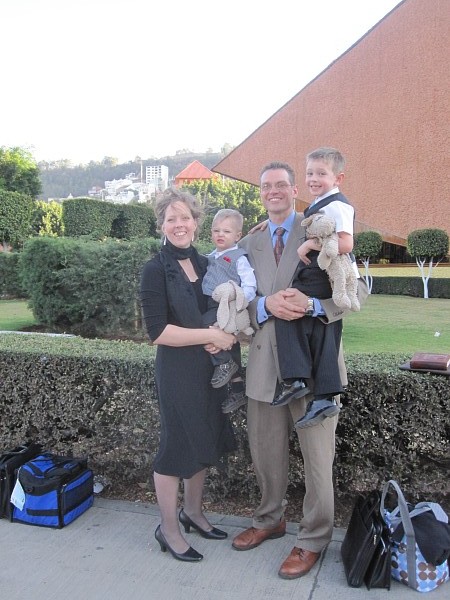 Previous post: SO CLOSE YET SO FAR (by Austin, India, Ginger Kitty)