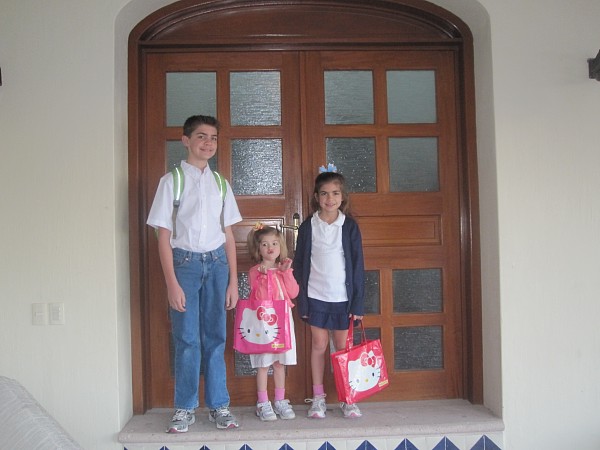 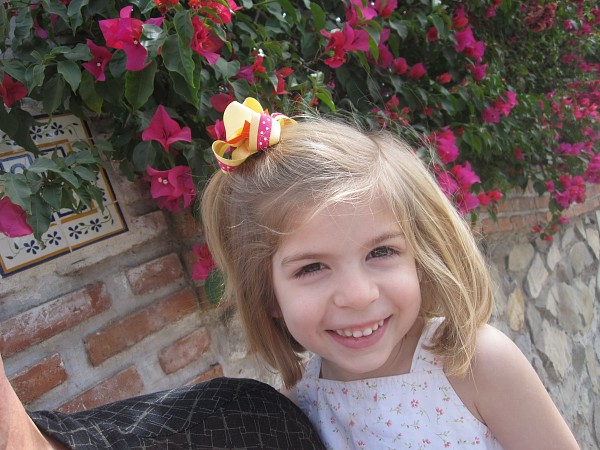 Selena Lilly on her very first day of school

Today was the first day of school for the Enos tribe.

It has been just about a month since the last day back in Swansea and Austin, India, and Ginger Kitty have enjoyed their time off -no boredom in this group.  We figure everyone back in New England has been out of school due to all the snow, so they have been following the same schedule.  🙂

As you can imagine, there were some very nervous kids here last night and this morning.

Last night there were anxious faces and sleepless tossing -as can be expected.

We all got ready this morning and into the car to ride to the new school.  They were escorted one by one.  Each one to their new class.

It was terrible… for the momma.

(ok, now you know that this momma is never excited when the school year starts and this was the first day of school for ALL 3 of my kiddos.  even my baby!!!)

Used up a whole pack of tissues watching them go.

First was Selena.  She was the only one who was very excited last night.  She was the first one dressed this morning.  And she just was ready to go.  (except she told us she was nervous because she “don’t know a lot of math”) 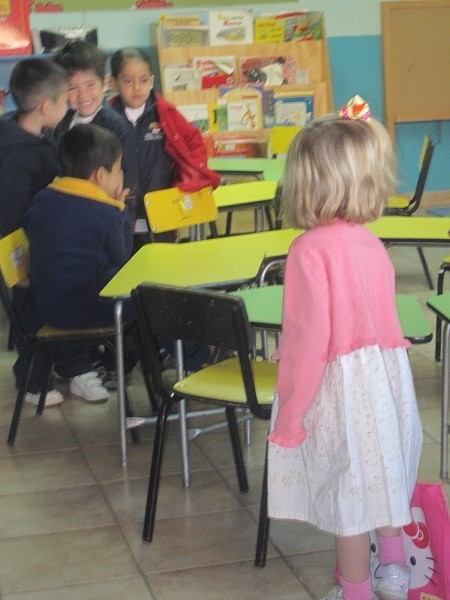 Can you spot the new kid? 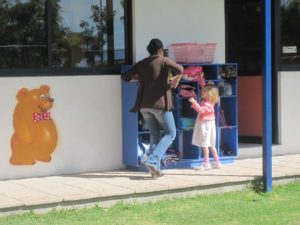 Then it was India who was being super duper brave.  And finally Austin.  The sunglasses were not a very good camouflage but this momma kept her sunglasses ON. 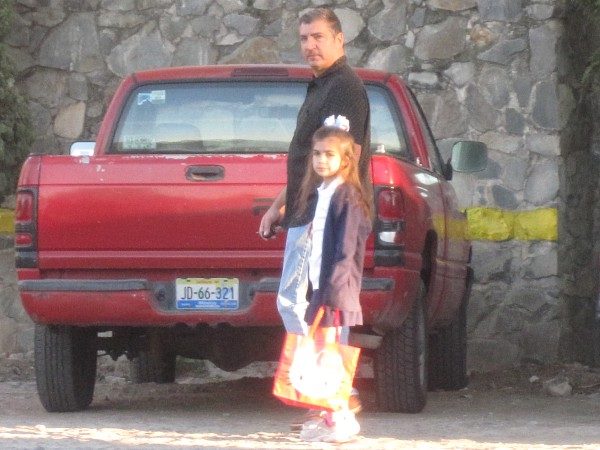 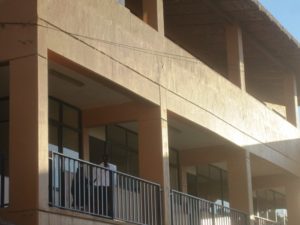 As parents there are things we do for our children that may be painful for us to watch them go through.  I think of when they get shots.  Ouch!  And you hold them and they are crying and you wish they didn’t have to feel the pain.  But now I know they are safe from some very terrible diseases.

Well, this day was like that too.  This is the best way for them to keep their education running along in high gear and also for their Spanish to become fluent quickly.

The kiddos do not currently speak Spanish.  They do not realize it but each day their vocabulary is already growing in this new language. The combination of their bilingual schooling, tutors, and their parents speaking Spanish as much as possible will make this transition quicker than they realize.  And, the more they understand Spanish, the more comfortable they will be in their new environment.  Already we see them making great progress! 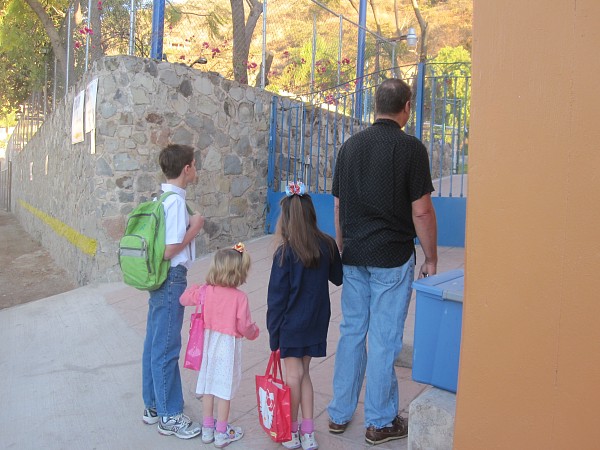 Are we ready to go through the gate?

During our visit to Mexico last summer -when were “speed dating” in each town to check out all the options and see what would be a good fit- SCHOOL was very high on the priority list.

We visited the 3 bilingual/multicultural schools here in town.  There are Loyola, Roosevelt, and Terra Nova.  If you are thinking of moving down here and are used to shopping online to find out info, you will need to adjust the line of thinking.  You really need to personally visit each one. Each family has different views and needs and expectations of education.  (other options we know of families using are the Mexico public school system, home schooling, and an open air Waldorf school)

We are checking out the Terra Nova school -it seems to be the best match our education philosophy.  It is about a 12-15 minute drive from our home.  Plus, all three children will attend the same school.  The students who study there can go back to the US at the same grade level or higher.  Very progressive and enthusiastic.  Love it! 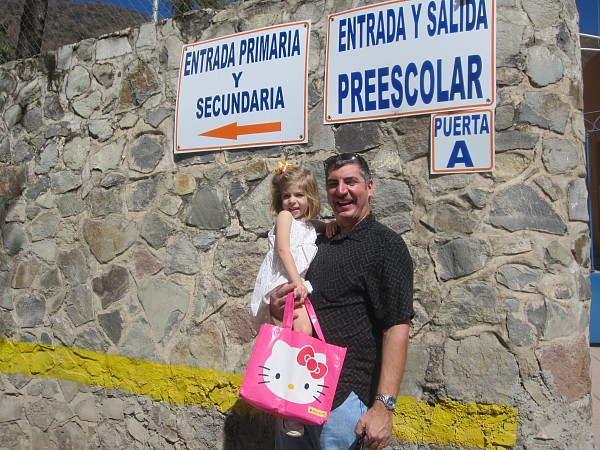 My children attended public school in the United States and it was a positive experience for them.  For many years, there has been a push in our town for full day kindergarten.  (Austin is in 6th grade and it was way back then)  Parents have several reasons for this -it seems the primary one is that it assists with the cost and figuring out of childcare for hard working parents; and the secondary reason is so that children can keep up with the fast pace of the curriculum.  The schools have to work hard to keep up with the state standards, not so much for quality of education but the the way the schools receive funding from the government.  Just recently there were lots of cheers and hi-fives for finally passing this. 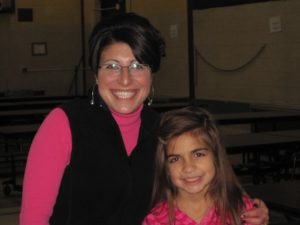 India just LOVED school -and her teacher- back in the US 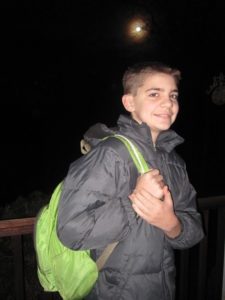 Austin was NOT a fan of leaving for the bus at 6:30am

And you might want to know how everyone did.

They did great!  Each one of them had a very different experience.  Austin and India each saw Selena (good job watching out for your baby sister) when she had her recess.

Selena’s class is working on letters and numbers up to 20.  She is in the class of 2nd year kinder.  Very nice workbooks and fun activities.  They even have music, dance and computer classes for the little 3-5 year olds.  (they read in the 3rd year of kinder which is equal to US kindergarten)

India is so brave.  She was very nervous but she has such determination.  Mikee and I told the kids that today was just about getting a feel for things and not to worry about the work.  Well, India went in and tried to do her very best (like always) on all the work -even the work that is in Spanish.

Austin was prepared for a fate worse than death.  And guess what?  He had a very nice day.  The day turned out much better than he had anticipated. They teamed him up with another English speaking student (who also speaks Spanish).  He helped Austin here and there. Austin liked that they mix lunch and recess together, so you can eat fast and go out for recess if you want. They watched a video about Harriet Tubman (a slave that ran away that helped thousands of slaves escape in the underground railroad) in Spanish.  He thought it was funny to watch this video in a language he doesn’t understand. 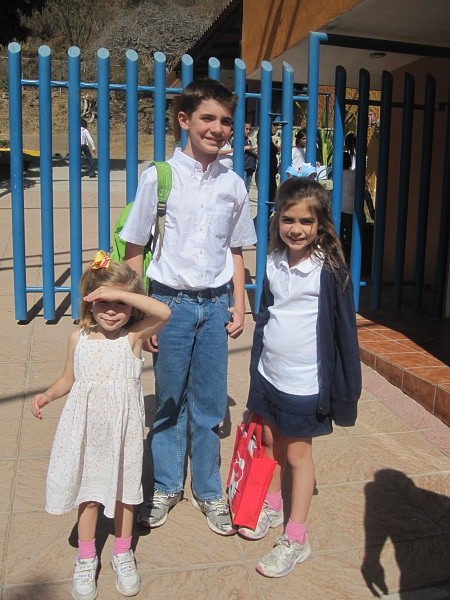 Just a side note of thanks to Miss Diane and Mr Doug for helping me out with Selena back in the States.  Remember our concerns about her?  Well, since we have been in Mexico she writes her letters and numbers and tells them to us in … SPANISH.  The other day she comes up to me with a banana.  She had peeled off the sticker and showed me,

The first word she read ever was in spanish!

(maybe that was the thing all along.  she was waiting for spanish) 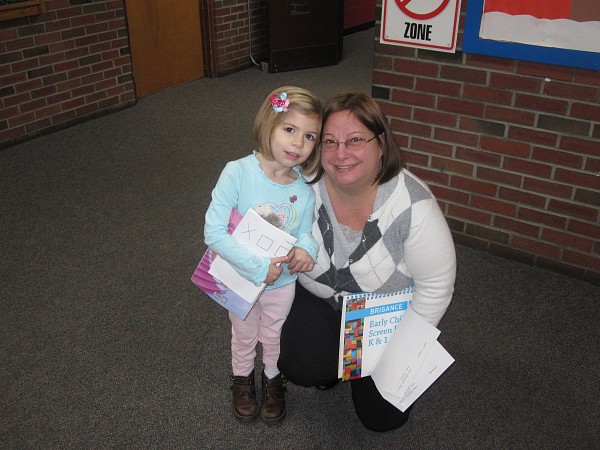 PS- I had a phone call from the Swansea School Dept asking me to sub the other day -guess someone goofed in the record keeping.  🙂  I really miss subbing.  Who knows, maybe I can start here in Mexico.

PPS- oh, and yes, there are still tons of boxes in the house to unpack. 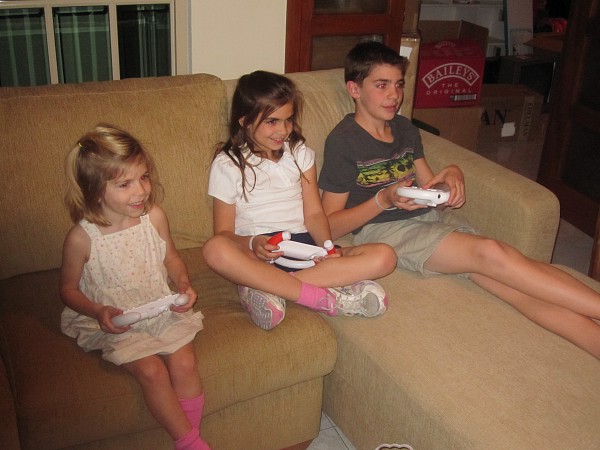 Previous post: A 21st Century Garden of Eden (by Austin)