Saturday is service.  The first Saturday of the month the entire congregation meets together.  We had 35 people show up -this includes quite a few visitors that came out.  That is more than the meeting attendance of our tiny congregation.

Mention of Mexico makes many people think of colorful Mexican dancers, guitarists playing romantic serenades, and sleepy little towns with houses of whitewashed walls and red-tiled roofs. Others think of a traffic jam in a megalopolis such as Mexico City, Guadalajara, or Monterrey. Some call to mind a people who are humble and hospitable, who smile and offer a friendly handshake. Mexico is all of that but also much more.  What really characterizes the people of Mexico is their deep love for family, God and the Bible.

The official language is Spanish; yet, there are many English speaking people here.  A large number of US and Canadians retire to Mexico to enjoy the weather, the lower cost of living, and a less stressful pace of life.  There are also an increasing number of people who were born in Mexico and moved to the US and are now returning for different reasons (high cost of living, lack of jobs, deportation) and they speak more English than Spanish now.  Also, their children speak English too.

Our family moved here to help out with the English speaking people who would like to study the Bible.  Our Saturday was spent in this activity.  We did not expect to spend the entire day but it was fun.  There are over 710,000 Jehovah’s Witnesses here conducting over 946,000 Bible studies with people.  Last year 1 out of every 58 people in the entire country attended the Memorial.  (the annual commemoration of Christ’s death)  Since this number is so much higher than the actual number of Witnesses in the country it lets you know that there is such a deep interest in the Bible.  These numbers represent mostly Spanish speaking people.

Right in town we visited with some who had shown previous interest and had asked us to return.  (the challenge for us is to find our way around the narrow little streets since we are new here.  we figured out that once we were at our destination, it’s a good idea to pop it into our gps)

Then we started to head out and around the lake.  The witnessing work is very organized and we were heading to a specific area -over an hour’s ride away.

On the way we stopped for some Mexican “fast food.”  In one little town there is a shop/stand on the side of the road.  There were at least 3 women working quickly to keep up with the customers.  There are all kinds of fresh fruit and you choose what you would like.  They cut it and put it into a plastic bag.  I chose watermelon, cantaloupe, jicama, mango, pineapple & coconut.  Then the woman adds lime juice, some salt and chili pepper –it makes the flavors of the fruit just POP! Next to her was a woman with fresh juice.  (you have probably read the kids posts about the fresh juice -that is always served in a plastic bag with a straw put in)

Apologies for the pictures not being clear.  I had 3 kiddos, Mikee, the vendors, and some friends all talking to me at one time and I was balancing on the edge of the “sidewalk”.  But, hopefully it gives you an idea. 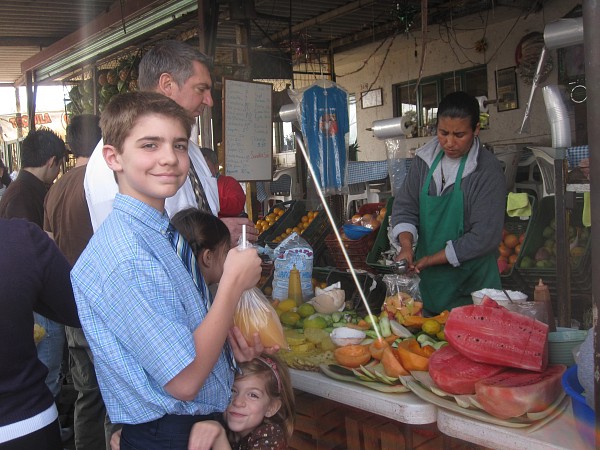 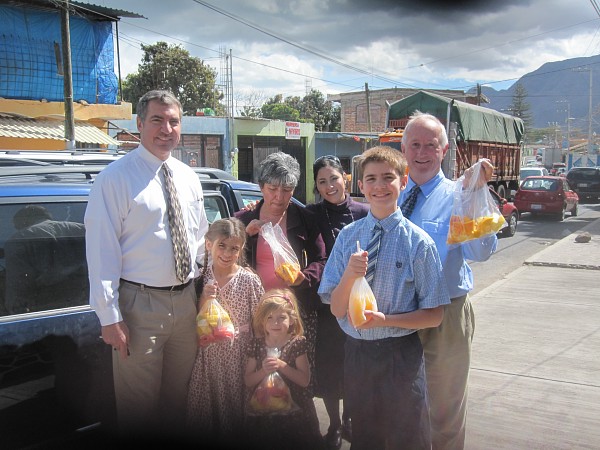 And it cost about $6 for a couple bags of fruit and the juice.  A healthy and delicious lunch for the whole family.

We then kept going on our way -stopping from time to time to call back on some people we had previously met.  Finally, we made it to this little, teeny, tiny village.  (I use that phrase a lot but I don’t know if you can picture how little these villages are)  This is a new territory and that means that we visit each home and say a greeting and ask if there is anyone in the home that speaks English.  Honestly, if you were to look around you would think there was no one here that spoke English -this is as Mexican looking a spot as there is.  But guess what?  There were some English speaking people! 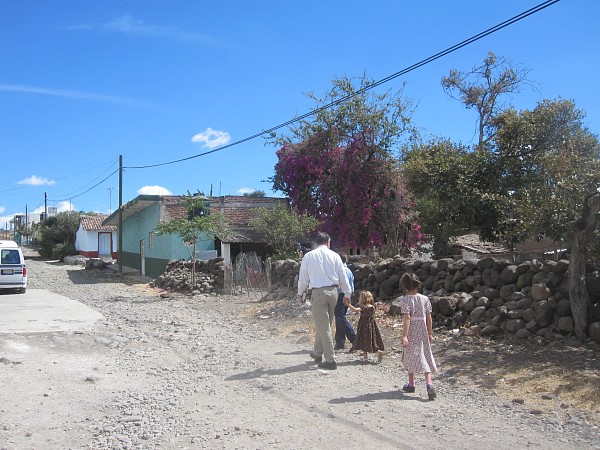 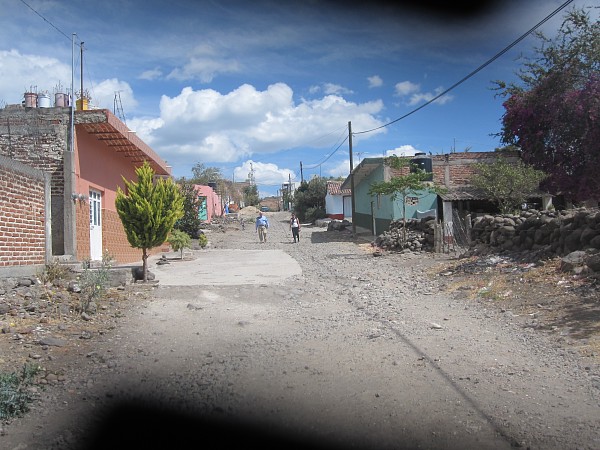 Mikee, the kiddos and I went into this one little shop that had 3 women behind the counter.  They were so friendly.  EVERYONE IS SO FRIENDLY!  ALWAYS!  He chatted with them -in Spanish.  They laughed and asked what is a gringo doing way out here and that he must be lost.  We explained what we were doing and that we had just moved down.  They wanted to know if we like living here.  Mikee told them yes and then describe how cold and snowy it was back in the States.  They were amazed at the descriptions of cold and snow.  (actually we are amazed at the intensity of the cold and snow this year too)

We purchased a kind of popscicle from them.  Fresh pomegranate (Austin’s fav fruit) and a little sugar and water frozen -of course in a plastic bag.

As we continued on the street, we found a little girl that is India’s age and she ONLY speaks English and witnessed to her.  She is visiting family.  Then she came over the little store.  When I asked to take a picture the ladies behind the counter hid but the little girls had to fix their hair first. 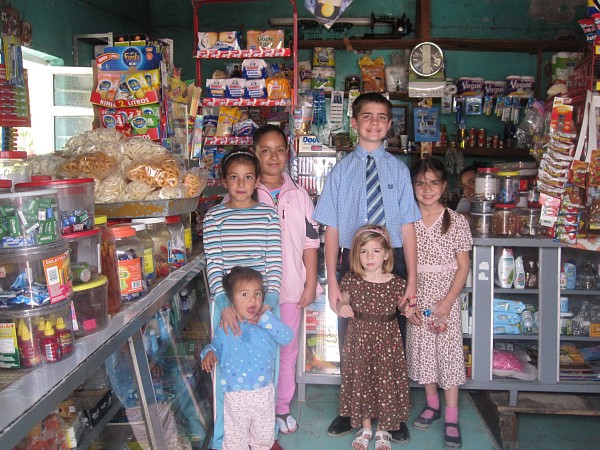 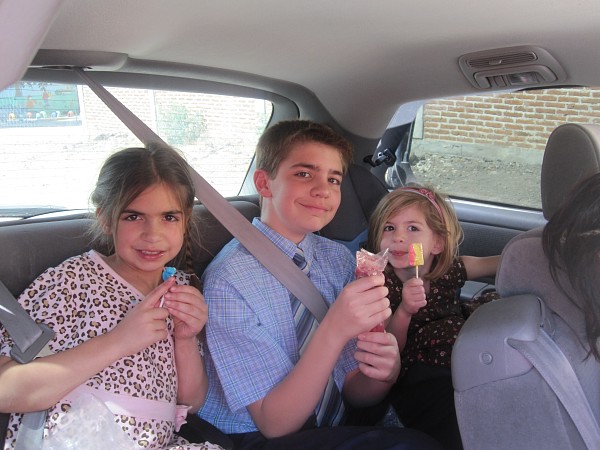 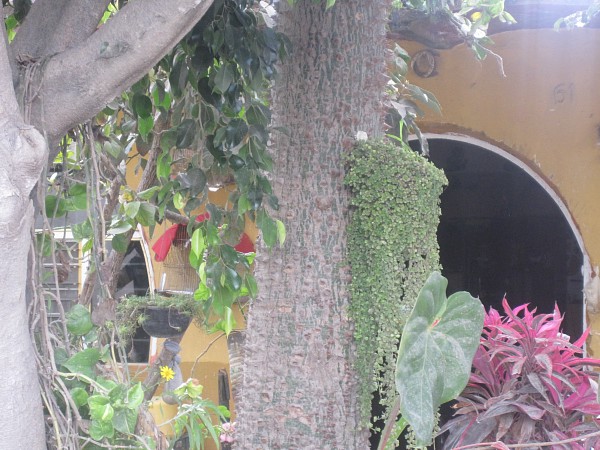 Cool garden outside a little shack of a house

At the end of the day, our car group started 2 new Bible studies, placed 4 What Does The Bible Teach books, several magazines, and a half dozen return visits on previous interest.  Pretty good.

PS- of course we can’t ever end a day without a little surprise adventure.  When we let our friends off to their car, the battery was dead.  Good thing we keep jumper cables in the car. 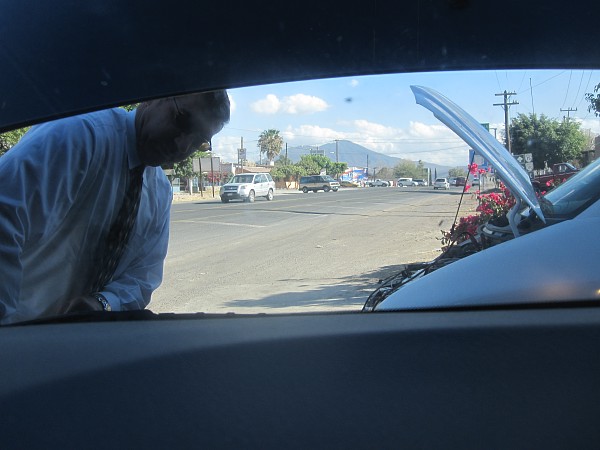 Previous post: What The Girl Team Did (by India)