Just A Typical Day In Mexico…

Mike here.  Camille is too tired from all her shopping to do a blog post, so I’m making a guest appearance. 😉

Today was just a typical day in Mexico. You simply never know what is going to happen, or what’s NOT going to work or happen.

I invented a new word today, but I’m not quite sure how to use it.

Let me explain how this happened.

Here in Mexico, it’s not uncommon for people to have a dog (or dogs) on the roof of their 1 level home. So when you walk toward such a home, the dog will often run to the front of the house so he can get a good view of you and bark like a … well… like a dog.   Well our friend Lapriel was telling us how yesterday one of the roof dogs ran toward the front of the house she was approaching. When it put on the brakes to avoid going straight off the roof and becoming a pavement dog, he kicked up a bunch of dirt and dust which hit her in the eyes. She said “Ack… I can still feel in scratching my eyes.”

Now I have to come up with some meaning for it.   I don’t think I want to limit it to times when a sliding dog threatens you with blindness, but need to be able to apply it to a wider meaning so it will find usage not just here in Mexico, but internationally.

I got to use it tonight when we went to a small quirky restaurant called Cafe MaGaNa.   It specializes in fish. They have AWESOME fish tacos there. 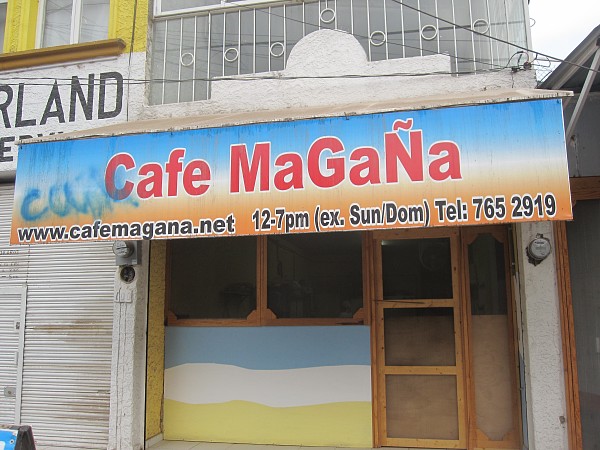 So today was one of “those” days. I’ll share a little background. The family headed out to Walmart to do our shopping.

Austin & I dropped off the girls at Walmart and went to get our hair cut at the BarBarShop, which is a combination bar and barber. A beer, haircut, and tip is about $8.00.  Unfortunately, the sign in the front window said “On vacation, back sometime in July”. Wow, now THAT’s a vacation.

So Austin & I returned our shaggy-haired selves to Walmart and caught up with the rest of the family and finished our shopping.

Well we had just walked out of Walmart and it was lightly raining as we walked to the car. The kids jumped up and down like it was the first snowflake of the season.  See… here’s the weird part. This IS NOT the rainy season.  In fact there has not been a drop of rain here in 6 months, and rainy season does NOT start until Mid-May (early) or early June (on time).   It NEVER rains in April.   So needless to say we were all surprised by the light rain.

So since we were only about 5 minutes away from the restaurant (which is normally a 35 minute drive without traffic from our house) we figured it would be a great time to go. So as we’re getting out of the van, the rain is starting to come down HARD and it’s getting increasingly windier.  Not only is there rain but also THUNDER and LIGHTNING!  (loud and close)  Remember… it does NOT rain here in April, and it has not rained here in 6 months.

We walk in the restaurant and the kids grab a booth and Camille & I grab a little table 7 feet away for the two of us. About as close as we get to a “date” 😉 The wind starts picking up and gusting VERY strongly, almost like a hurricane. Now since it’s about 83 degrees outside, and up to a few minutes ago very dry and sunny, the restaurant has only screens on the front, so everyone starts moving away from the front of the restaurant as the rain starts coming inside.  But then we start hearing noises like large metal objects breaking lose.

That’s when this happened:

Yes, the wind blew the sign right of the roof and it came smashing down into the parking lot ripping some wires out, while other wires kept it from crushing the Volkswagon.

The amazing thing was that the lady with the Volkswagon (parked 10 feet away from my van) almost got destroyed never got out of her seat to see what happened.  The sign landed about a foot away from her car, was being held up by electrical wires and she wasn’t concerned.  Talk about the laid back Mexican lifestyle!

When I told her that she just had a narrow escape, but the sign was being held up by wires and could crash on her car, she didn’t even get up to  move the car.

So after about 15 minutes more the rains and wind died down. 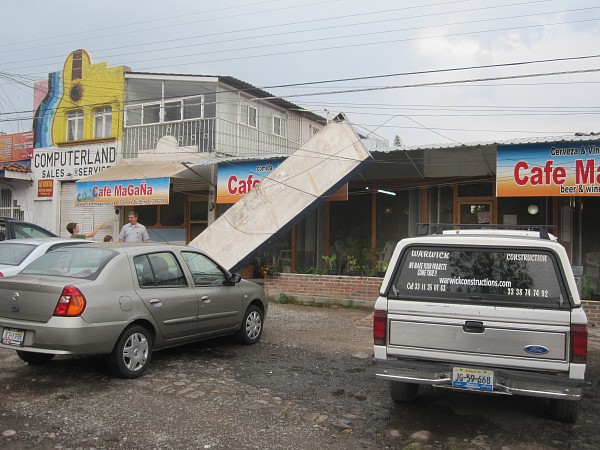 So as we drive into our development at the guard shack we see this sign. 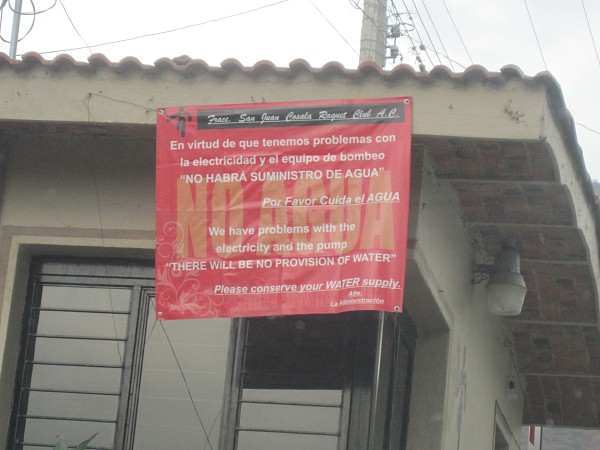 No Water For You!

Camille & I both notice that the sign was obviously professionally created some time in the past.

Hmmm… Either they knew this was going to happen, or it has happened other times.

See what happens is that the development gets it’s water from thermal hot springs deep in the rock below us. They pump the water into storage tanks and then pump it into our tanks 3 days a week. The water comes in VERY hot.  It then gets pumped to the roof of each house where it acts like a tiny water tower.  So when we get home it sounded like the bottom tank was getting filled. Sweet… no problems. As long as the pumps fill our tanks every scheduled day, we only run out if the kids leave a sink running overnight and the gardener also forgot to turn off the outside garden hose.

But then a few hours later Camille noticed the sound of the pump that sends the water to the roof was running constantly. That means that the tank on the roof is empty.

For some goofy reason, the only way to turn off the pump is to go to the roof and turn the float that is inside the storage tank upside down so the pump below will stop trying to pump imaginary water from the lower tank.

Now it’s 9pm and very dark out, but fortunately an almost full moon.

So Camille & I head out to the upper terraza put the ladder against the wall and climb onto the roof.

I adjusted the float which stopped the motor.

So now we have no water in the house.  Sunday is the most special meeting of the year for Jehovah’s Witnesses, the Memorial of Jesus Christ’s death, and not being able to shower is going to make things a bit tricky for getting ready, but we’ll figure something out, we always do 😉

You have to be flexible here in Mexico. 😉

When we arrived home from Walmart, we noticed a bunch of people watching a water truck stuck at the top of the hill. I have no idea how a truck with 10,000 gallons of water which weighs about a gazillion pounds (yeah… I should use metric, but I won’t 🙂  ) even got UP that hill. It is CRAZY steep. I don’t like driving up or down the hill. I’m always afraid my brakes are going to fail.

About 3 hours later they finally got they started slowly bringing the truck down. It seemed they had the emergency break and the truck in 1st gear.

Hmm… I think I have it worked out for this new word:

Roof-Dogged: (verb) An unusual, strange,  or unexpected event that occurs which gives the receiver and interesting and/or humorous story to share with others.

It’s Sunday morning and I just checked the tank and still no water.  We might get it today and we might not.

Yet oddly, we don’t upset over it. I can remember back in the States… getting all upset over there being 3 cars in the Dunkin Donuts drive through line, a price check at the register, or some other inconvenience that would cost a minute of time.  Getting all stressed over a tiny matter or inconvenience. You simply cannot survive down here if you react that way. It’s all in how you look at things I guess…