There are so many different things to experience here in Mexico, that it could be a full-time job to explore and document.  We try our best.

Very soon after moving here, Austin went to lunch with his new friend Stan -which is now his old friend.  (not because you are old, Stan)  😉  Austin came back with a pile of shiny black glass like pieces of rock.  Obsidian.

Obsidian is volcanic glass.  It is the magma that is spewed up from inside the earth that quickly goes from liquid to solid.  The speed is what accounts for the super smooth glass like characteristic.  It is brittle and WATCH OUT because the edges are extremely sharp.  Trust me.  In fact,it has a cutting edge sharper than high-quality steel surgical scalpels and is being used experimentally for that purpose.

There are areas where there are fields and fields of this black glass like rock.  The fields are planted with agave (think, tequila) and corn and amazingly the plants grow surrounded by these former flows.  Agave looks like giant pineapples that are standing up on the surface of the ground.

It only took us 18 months to finally get out there.

Our fearless group filled 2 cars with excited people and coolers of sandwiches and homemade cookies and LOTS of water and ventured out not just to the obsidian fields but also a couple other stops on the way.

The first destination was Magdalena, a small town about 2 hours away.  The cool thing we did was to go to an opal mine and actually mine for these pretty gemstones.  We all found some opals.  The tricky thing was to chip away at the stones without breaking the veins and deposits of opal that was locked inside. 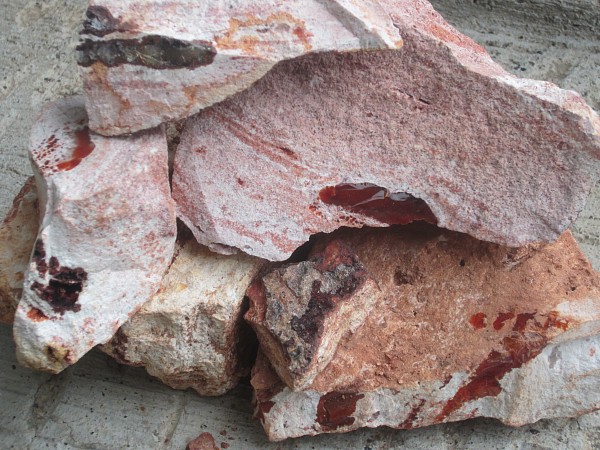 These are the chunks of rock that you mine the opals from.

If you are in the area and would like to visit the mines, you can check out this link for OPALOS DE MEXICO…

We worked up quite an appetite from that and enjoyed our lunch out in a field of obsidian. 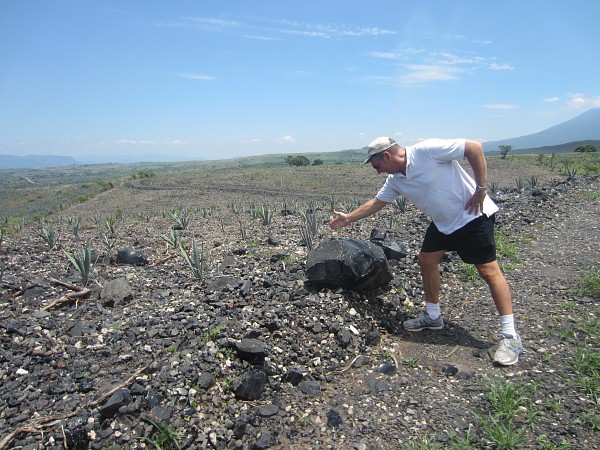 Mike, about to chop a piece of obsidian (volcanic glass) in half. 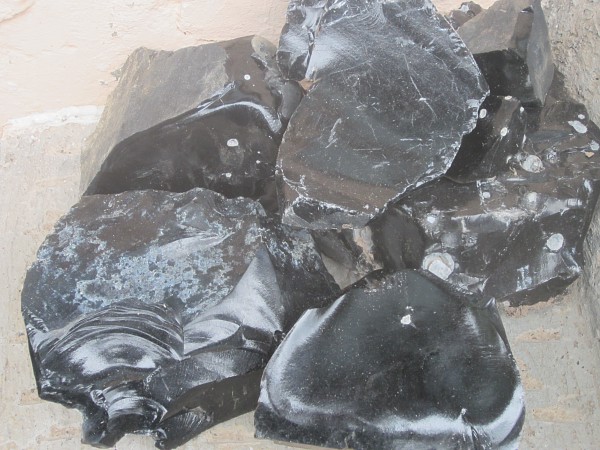 Then we drove through Tequila and learned how that is made.  There is a lot of manual labor involved in the process. 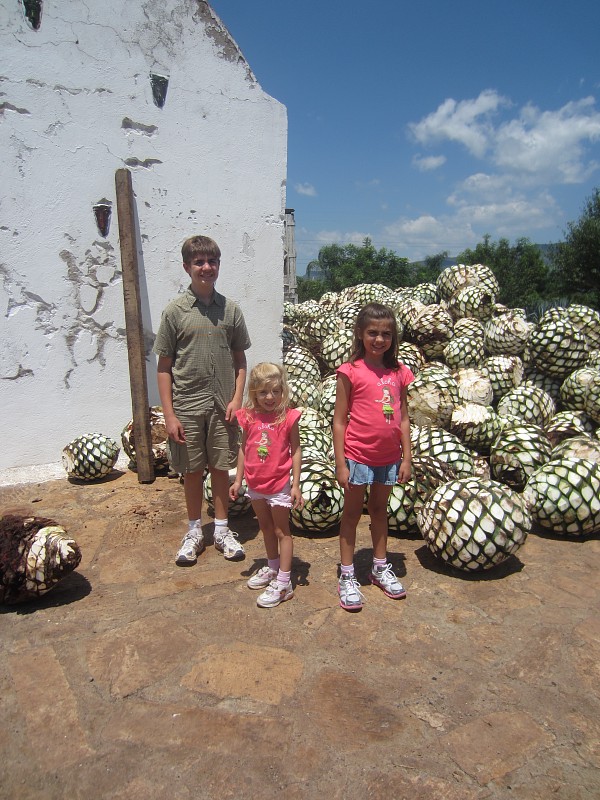 This picture was taken at a tequila distillery called “Tres Mujeres”. These are the tequila pineapples that are processed by steaming to extract their juice.

Many people know there are a lot of ruins from ancient cultures here in Mexico.  One site is just outside Guadalajara in a place called Teuchitlan.  (I have tried and tried but can’t pronounce it) 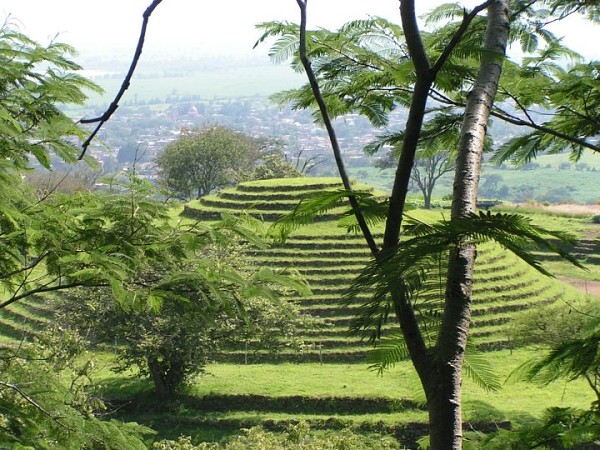 Picture of the ruins. (Thanks Tara!)

Basically the story told is that farmers grow corn up on the hills.  Some history buffs were traveling and recognized the little roadside souvenirs as real archeological items.  When they asked about them and went up in the hills, they discovered conical pyramids that were pretty much buried in farmland.

Here is some info I found…

Just outside the unassuming little town of Teuchitlán, Jalisco, 40 kilometers due West of Guadalajara, lies one of the most impressive archeological sites in all of western Mexico. However, the first time I saw it — in 1985 — I was anything but impressed.

“Where’s the pyramid?” my friends and I asked a local farmer, who then pointed toward a hill completely overgrown with thorns, brush and skin-irritating dominguilla. A half-hour later, sweating and muttering, we reached the top of what obviously was not a natural hill. “It may be an unusually tall heap of rocks,” we muttered, but that’s all it is, just a heap of rocks.”

Without realizing it, we had drawn a conclusion similar to what many archeologists of the time thought about the nature of ancient west Mexico and — like them — we couldn’t have been more mistaken.

Unknown to us, two local researchers had looked beneath the surface at Teuchitlán and had discovered that the textbooks were wrong. An amazing civilization — with a style of architecture unique in all the world — had once flourished in those weed-covered hills.

In 1970, a Mexican professor of Art History and an American archeologist, Acelia and Phil Weigand, happened to be visiting Balneario El Rincón, the natural spring from which the Teuchitlán River is born. In the swimming pool, Acelia Weigand found an obsidian blade, which intrigued the couple. “Where has this come from?” they asked themselves. They began hiking in the hills just above the balneario and ended up wandering among the ruins of the pyramids now known as Los Guachimontones. Phil Weigand says, “I stood on the largest pyramid, looked around and thought, ‘This is unexpected.'”

It turned out to be an understatement. The Weigands set aside a summer to explore the pyramids they had found and ended up spending the next 29 years documenting a complex, highly organized society which had begun in western Mexico in 1000 BC and had reached its apogee in 200 AD. They discovered that Teuchitlán had been, in fact, a metropolis of sorts, housing around 25,000 people fed by produce from hundreds of chinampas, small agricultural islands irrigated by an ingenious system of canals, dams and floodgates. In those days the economy was booming, for these people traded in salt from the flats of Sayula and, more importantly, they were situated right next to the third largest obsidian deposits in the world. In fact, they controlled more than 1,000 obsidian mines, from which some 14,000 tons of the precious volcanic glass were extracted. In Teuchitlán’s workshops, skilled craftsmen fashioned the obsidian into knives, spear heads, mirrors of extraordinary quality, unique, ultra-thin earrings and flat-bladed swords called macahuitls, capable of chopping off an enemy’s leg or a horse’s head with one blow. In a society without hard metals, obsidian was the very gift of the gods.

What a day!  We were wiped out but had a super duper most wonderful awesome time!

Stan and Lapriel are the best tour guides for this area since they are so familiar with it.  But now we have it all marked on our GPS so we can bring you when you come to visit.  😉

Previous post: GINGER KITTY HAS A KITTY -KIND OF