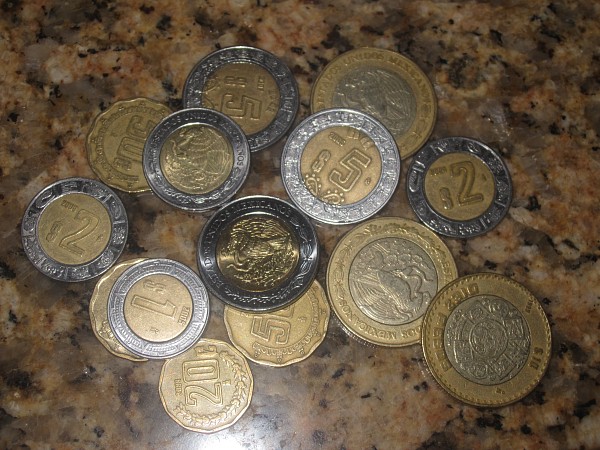 Do you feel like people are asking you for money all day long?

Telemarketers on the phone.

Letters to donate for different charities that come in the mail.

Here I don’t get very many phone calls or mail and I don’t shop in the big grocery stores.  But there are still people asking for money.  It just comes in different forms.

Today on the way home from school with the kiddos I ran into the Oxxo (like Cumberland Farms) to grab some milk.  It’s a little more money but right on the way.  The milk is 20 pesos so I hand the guy exact change.  He asks me for 2 more pesos.  Caught off guard (because you know how it is in mom world  where you are having 16 dozen things going through your head and your full attention is not always on the task at hand) I asked him what he said.  He repeats asking me for 2 more pesos.  I asked why.  He says for the milk.  My response is that it’s only 20 pesos and I just paid the correct amount.  Up to this point our conversation is all in spanish.  Then he says in english, “But I need the change.”

Then he smiled and I smiled and he said, “Hasta luego.”  (see you later)

What would your response have been been? Leave your comment below.  We’d love to hear.

Here’s the cultural thing about life here.  People are not mean or evil.  But they feel that people who have more have a responsibility to help those who have less and are not afraid to ask.  Especially since every Gringo is rich compared to people from here.  You will have the opportunity to do your share to help whether you know it or not. 😉  You learn to always pay attention.

Mikee was at the gas station last week and the girl smiled as she handed him change (which was short by 50 pesos) and she continued to smile as she fixed her “mistake”.

There are many times I hand a couple pesos to people.  A single peso equals about 8 cents.  The person who bags your groceries, the guy who takes your cart back for you, the street jugglers,  the blind guy holding a sign that says, “It’s a beautiful day today, but I can’t see it.”  (he really is blind.  we saw him almost get run over Saturday afternoon), the person who fills your gas tank & washes your windows at the full service gas station.  It’s a simple act of kindness and it makes a difference in someone’s life.

Most Mexicans live day by day.  And 8 cents here and 8 cents there adds up pretty quick for them.  We don’t get upset by it.  They are not rude or obnoxious like your typical telemarketer or time share salesperson.  But we do always have to pay attention.

Yesterday we went to a really nice restaurant in a typical poor Mexican neighborhood and as soon as Mikee pulls up to the (18″ tall) curb a little 6 year old kid comes up smiling and starts in a fast incomprehensible flurry of words asking for some money.  Just to mess with him Mikee asked why.  A second flurry of words come rushing out.  Mikee gives him 2 pesos and tells him (with the 2 finger point to Mikee’s eyes, the kids eyes, and the car) make sure nothing happens to the car.  We made that kid happy and nobody threw any rocks at the car.  (not that anything bad would have happened)

How many kids do you know that you could make so happy for just 16 cents?

It’s not just a Gringo thing.  The Mexicans are also very generous to someone in need.

The guys in the Oxxo get paid pretty well.  Their little scam probably works many times.  There are many people here who don’t speak spanish or they get nervous and they probably just hand over the change.

But not this chica!