LEFT TURNS -AND OTHER MEXICAN ODDITIES

There were lots of interesting things in Mexico that we became accustomed to seeing in our daily travels.

DRIVING: Most of the driving is just what we are used to –except for Left Hand Turns. To make a left hand turn you first pull way over to the right, and when the coast is clear pull across all the lanes to turn left.  This took a little getting used to.

In Manzanillo there is an extra lane on the right (separate from the rest of the traffic) to pull into and wait for a light to give you the right of way.

Also helpful is the blinking green light to alert you that it will soon change to yellow,  and you better hurry up.  😉

While sitting in traffic you can get your windshield cleaned, purchase cotton candy or any assortment of snack or beverage, or just watch some entertainment.  We had fun watching this guy juggle. (we drove through to try and tip him a couple pesos but we had a green light and couldn’t stop)

MIRRORS: Many of the roads are super narrow.  Or, they are just not wide enough to accommodate cars coming from 2 directions.  We have adjusted to being ready to fold our mirrors in or out as needed.  (oh, and those telephone poles you see are made of concrete -you do not want to bump into them)

Oh, and we have to mention that the roads actually resemble river beds.  They call it cobble stone -but it is not what we are used to seeing as cobble stone.  It’s river rocks packed down to form roads.  Kind of bumpy but you get used to it.  What cracks me up is that on these rocky bumpy roads there will be …speed bumps called topes. (toe-pays)  As if you needed something to slow you down and add an extra BUMP. 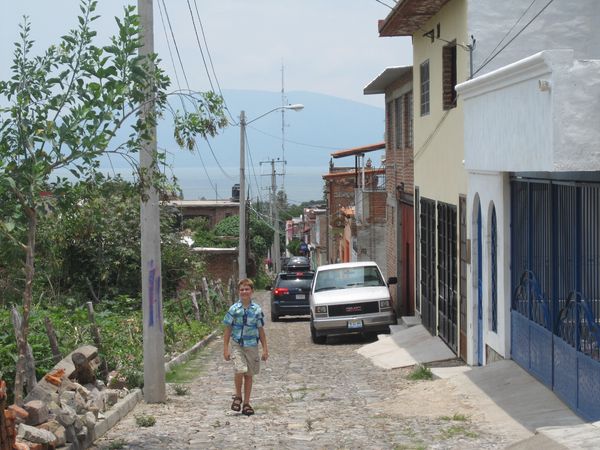 DOGS: They are everywhere!  In all shapes, sizes, and colors.  And they should have more fear of cars than they do. But they are as common as cabs in New York city.  One time I had to stop on the Carretera (the main road through town) as 4 buddies crossed.  The first was the largest and they descended in size.  I thought there were 3 and then a little tiny guy came running across to keep up with his buddies.

HORSES: Are also everywhere.  Not in stables but tied on the sides of the roads (even highways) to eat the grass.  Maybe they are government road crew workers because they do a good job of keeping the vegetation neat and trim.  You will see them right in the middle of town, out in the vast fields, and along the sides of the major highways.  They are still a mode of transportation for many people. 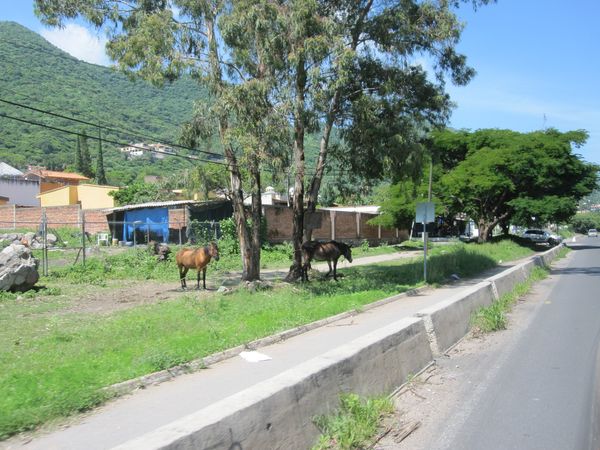 FLY SWATTERS: This is the best time to visit to see the worst of the weather -and it’s still great.  But… with the additional moisture this is the month that flies come out.  But, no fly swatters …anywhere. Mikee has been looking for a fly swatter in every tienda we go to.  Not a single one to be had.  (I might buy him one for an anniversary present this year) 😉